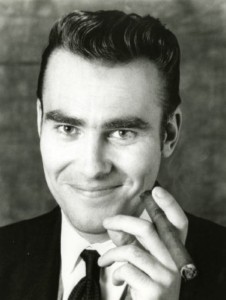 Many people in Toronto might identify Eric Tunney as the guy who co-hosted Ed The Sock for a stretch of time. These people aren’t a part of the comedy community, especially in Toronto. Eric was a favourite among audiences and comedians during the mid-90s, both on and off stage. There’s a whole generation of comics who were inspired by, and guided by Eric, who was always there to offer encouragement, helpful advice, or a funny story. Eric Tunney passed away last year. He was in his mid-40s.I loved Eric’s comedy the first time I saw it. I was a regular both performing and watching amateur nights at The Laugh Resort Tuesdays in the 90s. The Laugh Resort was on Lombard Street, three floors up. Eric was one of those comedians who I could see over and over, and still laugh at the bits I’d heard dozens of times. It wasn’t just the brilliant writing, it was the guy, the persona, that made me laugh every time. As funny as he was onstage, he was genuine, friendly, caring, and gentlemanly offstage. I was a huge fan of Eric’s, and would go out of my way to see him every time he headlined at The Laugh Resort, and along with many up-and-comers would hang out with him after the show at the pub just a floor down from the Resort. At the time, I was reporting on comedy for a radio show called Live in Toronto. The studio was not far from Eric’s home in the Annex. He became a regular, and I’d have him on as often as they’d let me – pretty much whenever he had a show booked. I recall on one occasion, he walked down to the station wearing what he called a “union suit.” It was basically grey coloured, one-piece, long underwear. Of course he wore a stylish hat, and had his ever-present cigar in hand. That’s another thing that made Eric stand out. He had Mad Men style, long before the show was even conceived. He evoked another era, with his stylish suits, neat, slicked back, slightly pompadoured hair. You’d often see him cruising around town in an immaculately maintained classic car, just loving life. He welcomed me into his world, and invited me to his place on occasion, and I felt a little starstruck. I don’t think he ever had a bad word to say about anyone, nor do I think anyone had anything but nice things to say about him.

His talent didn’t go unrecognized. He was featured on the prestigious HBO Young Comic’s Special in 1995. It was recorded at the Aspen Comedy Festival, and was hosted by Garry Shandling. It was HBO’s yearly paen to the best-of-the-best up and coming comedians in the world. Eric shared the stage that year with Dave Chappele, Louis C.K, Dave Attell, and Anthony Clark. It was around that time that he taped a pilot for a talk show. It was at a theatre at harbourfront, filled with fans, family and friends….and he was fantastic.

Eric moved to Los Angeles in the late 90s. I stayed in touch for awhile, then eventually lost contact. Every now and then I’d try to google him, or facebook him, but couldn’t find much information. I lost touch for many years. Just over a year ago, there was a Facebook announcement that Eric Tunney would be doing a one-off Toronto show. I was excited, but frustrated. I was stuck in Washington, DC house/dog-sitting. I wouldn’t make the show. It did however bring back fond memories, and once again, I tried through facebook to get some contact info through other comics and friends. I was unsuccessful. In a slight bit of irony, I was browsing through the HBO on demand at the house I was at, and came across the 1995 Young Comedians Special. I watched it, and though the material was familiar, it still made me laugh as much as the first time I heard it.

Thanks for everything you’ve done, for me, for your friends, for the comedy community, for everyone you touched, not just with your comedy, but by being a genuinely great person.