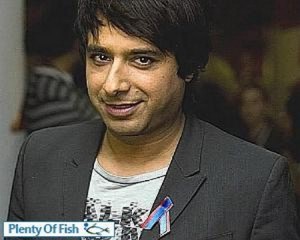 I always got the pretentious creep vibe from Jian Ghomeshi when I’d see him on television, even before I ever had any interaction with him. In July of 2009 – before I worked at CBC Radio – I saw him at a Just for Laughs “Sarah Silverman and Friends” show at Massey Hall. It was before the show, and he was standing up in the center aisle looking around. I tweeted something to the effect:

@JianGhomeshi looking for people to notice him, wearing sunglasses on his head 4 hours past sundown. #Ridiculous

It was early Twitter days for me, so perhaps I made the mistake of @ing him in it. In any case, the show was awesome – John Mulaney, Arj Barker, Todd Glass, David Cross, and Louis CK – and I went home. 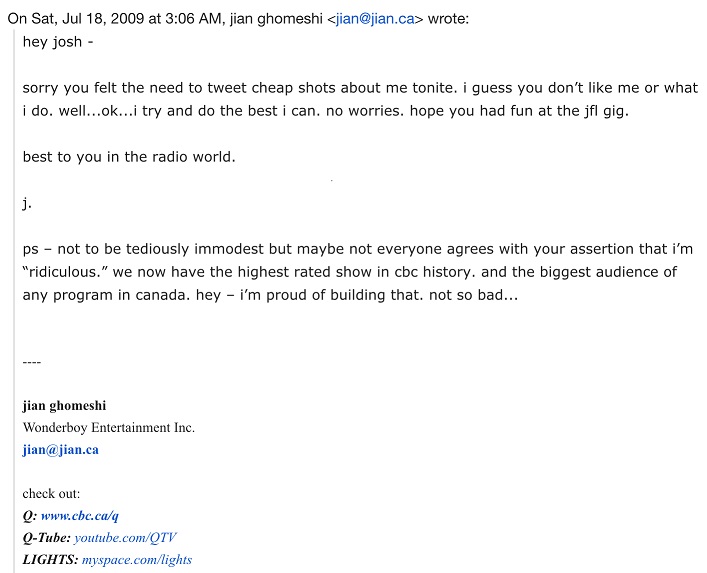 First off, he never had the highest-rated show in CBC history. The flagship show for CBC is As It Happens, which draws hundreds of thousands more. Later he would often assert in media and online that he has the highest-rated arts and entertainment radio show in the country, failing to mention it’s the only national arts program in the country. I started working at CBC radio toward the end of that year, though not in the Q department. I never became aware of his penchant for sexual violence. I did know that when you’d pass him in the hall he reeked of cologne, and it was pretty well known that he was a pain in the ass to work for and he acted like a prima donna . He didn’t want his theme music used when guests hosted the show, he wouldn’t record promos on any other microphone except for the one in his studio that had been EQed and compressed to make him sound way smoother, and deeper-voiced. The thing that bothered me the most was the lack of acknowledgement of the large team working on his show. Outside of CBC, many of his fans would rave about his fantastic interviews and his insightful opening essays. None of that was him. To my count there were close to twenty people working on the show, researching his questions, writing his essays, and so on. There’s one subtle difference in the way he said things that was a small sign of his attitude. Most talk show hosts will speak in “we” terms – “we‘ve got a great guest coming up” or “on the show tomorrow we talk to.” With Jian it was always I. He loved fostering the illusion that he was a one-man show.