This is the very first entry in my cancer blog, and the hope is, my very last. A one-post entry.

In the early spring I noticed a new, pretty dark, but quite small mole on the back of my left calf – where I generally have large dark bruises from getting hit by hockey pucks. I was due for my physical in May, so made sure Dr. Photopoulos got a good look at it. He had me see the dermatologist the next week as a precaution, and to get my whole body looked at.

I got all naked, and Dr. Hanna the dermatologist examined my hot bod (play along.) He was concerned about the calf mole, so he sliced it off for two stitches and sent it away. I was to come back in two weeks to have the stitches out. In the interim, I had lots of time to think about the possibility that it was something bad. My health has been pretty good the last few years – I’ve lost about 45 lbs, my physicals have been solid, I’ve been eating well, and playing a lot of hockey. I also know that as we get older the odds get worse – one in 7 will suffer from this, 3 in 11 will succumb to that, etc. I figured I’d get something eventually. I always thought, if I was going to die, it would be on the toilet, or on a hockey rink. I just prayed it wouldn’t be on the toilet at a hockey rink. Because that’s disgusting. I also thought, because I had a butt fissure many years ago, that I would eventually have some kind deathly bum problem. I reasoned with myself that if it was skin cancer, it was the good cancer! OK, the less bad cancer.

I went in to Dr. Hanna’s office two weeks later, thinking he’d say it wasn’t anything, take the stitches out, and I’d be on my way. He told me it wasn’t what he was hoping and that it was melanoma. He explained the depth and spread rate of the cancer, and a bunch of other details, but I didn’t really absorb any of it. I think as soon as I heard “cancer”, I didn’t hear anything else, and my mind raced. I do remember him advising me to avoid Googling my condition, because it would only show worst case scenarios. He seemed pretty optimistic, which made me feel better. I also had a somewhat odd sense of relief, that it could’ve been much much worse. I’ve seen other cancers take a toll on loved ones, so mine didn’t seem like such a big deal. I’m also a very competitive guy, and was OK with having something to fight, a small sense of purpose. I know that sounds weird. The next step was setting up an appointment with an oncologist at Princess Margaret Hospital.

A few weeks later, I had a consultation with the oncologist Dr. Easson, and asked more questions about my case. I was curious to hear the numbers and what they 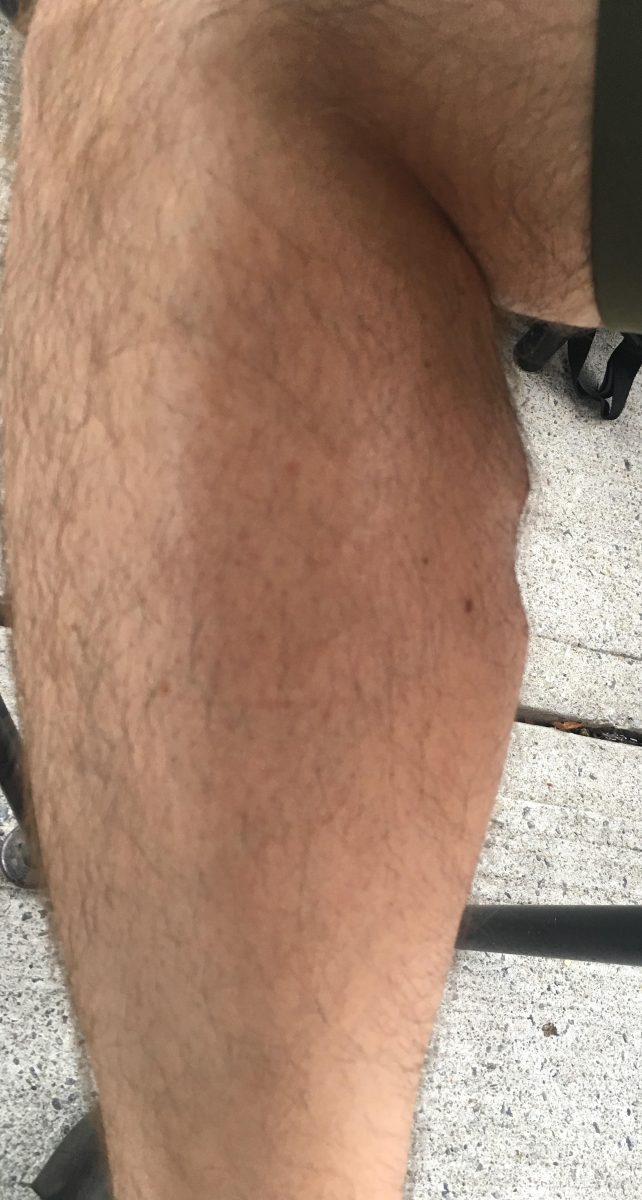 meant. It had a depth of 0.45mm, which is quite shallow. The mitotic rate (speed of spread) was less than 1, which is quite low. They checked my lymph nodes by my groin, as this is where spreading often occurs. No issue there. I just did some Googling (like a dummy) and it appears my classification would be a T1A, which (based on averages!) has a 5-year survival rate of 97%, and a 10-year survival rate of 95%. Great casino odds, but still daunting game of life odds. The next step was setting up surgery to remove a wider area of skin around the initial area where the mole was removed. The somewhat frustrating part was that they didn’t schedule the surgery until nearly three months after the initial diagnosis. That’s too slow! I considered other options (Buffalo?) but stayed the course.

Two weeks ago, on the morning of August 25th, I went to Mount Sinai hospital (where I’ve been a few times lately for hockey-related stuff) where they did the operation in a small procedure room. It was just Dr. Easson and her (yes her!) nurse. I’m a giant wuss when it comes to getting needles. I know it’s more the thought of it than the actual physical sensation. I can’t help it. When I go to get blood taken yearly for my physical, I need to lie down for about twenty minutes afterwards until the fainting sensation goes away. I brought earbuds along to play loud music – I think The Cult “Electric” album – to try and distract me. I did the same thing when I was getting the needle and two stitches at the dermatologist, and it seemed to work. Well, there were a lot more freezing needles than I thought, and I got super fainty! Luckily, I was already lying down on my front, so just tried to take deep breaths and ignore the activity around my calf. At one point, I felt a whole lot of liquid flow onto my calves – and I assumed blood. After they finished, I was still a little light-headed, so they gave me some water and the nurse – who was super-empathetic and helpful the whole time – gave me a cheese stick from her lunch. I had a big band-aid over the whole mess, and was told to keep it dry for two days. Underneath that there were lots of little rubber bandages, that would slowly come off over the next two weeks. I was told they’d send my flesh (being dramatic here!) out for pathology to make sure they got all the poison out. I’d know in about ten days. Two weeks to the day later, the call came….(drumroll?)

ALL CLEAR! Phew. Though I don’t want to be to flippant, cause that’s when it bites you in the ass, hopefully this is the last (and first) entry of my cancer blog. Don’t ignore anything suspicious on your skin, or for that matter, anywhere! Early detection is critical.