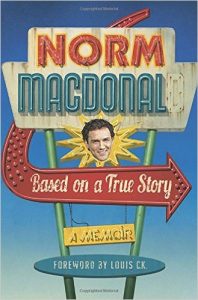 I’ve talked of my love of Norm Macdonald as a stand-up. Nobody’s made my stomach ache more from laughter at a stand-up show, from when I was in my late teens seeing him in a small Montreal club recording a segment for the Ha! TV channel (an early incarnation of Comedy Central) until more recently buying tickets to multiple shows over the same weekend engagement.

He was the best Weekend Update anchor on SNL. He’s had a sitcom, was a (very dark) horse to take over the 12:30 slot that James Cordon now occupies, and had a funny but under-watched Sports Show. He’s also the best talk show guest, as any talk show host will attest. He’s making the rounds this week to promote his new book, Norm Macdonald Based on a True Story. He has his own talk show, but unfortunately it’s not on HBO or any minor or major network, it’s on YouTube. He just returned from a two-year hiatus, and the Bill Hader episode is as fine as any to show he’s not just the best talk show guest.

Somebody give Norm a show. I anxiously await the Letterman appearance, and predict that will be the turning point.