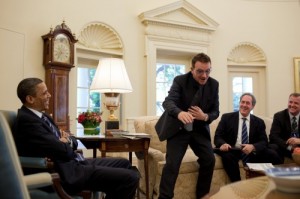 Was watching the Democratic National Convention tonight, and noticed a bit a poor, though obviously unintentional choice in music. The DNC killed the RNC overall. When Obama was introduced and came out to accept the nomination U2‘s song City of Blinding Lights played. On the surface, no big deal right? U2 played it live at his inauguration, it has  themes of rebuilding, Obama has listed it as one of his favorite songs, and it even won a Grammy in 2006. The timing of using U2 tonight is poor. Why? Obama is fighting a candidate (Romney) who’s being vilified for putting his money in offshore accounts to avoid paying taxes. In fact, it’s been a pretty major plank for the Democratic Party. The problem is that u2, as a band use offshore accounts (Holland) to avoid paying taxes in Ireland. It’s particularly hypocritical of U2, as they preach forgiving third world debt, governments spending money on AIDs research, and generally government’s helping the less fortunate. How do governments do this? With taxes collected. Bono is saying one thing, doing another, and that’s a huge amount of tax money that could be helping the people of Ireland and be doing greater good. All that said, U2 was a poor choice to introduce a president fighting against the type of  people who’d have offshore accounts.